The Event Industry has always been competitive, with Event Agency looking for an edge that takes their event to the next level. This has led to progressive Event Agencies using a wide variety of new technologies to engage their audience. The skies the limit when you think about what you can do when you couple new technologies such as Social Media and Live Streaming with the visual engagement of a large Event LED Screen. In this blog we attempt to discuss and suggest ways that anyone contemplating running and event can open up their Event to a much wider audience and get some real crowd engagement that will leave the crowd wanting more. 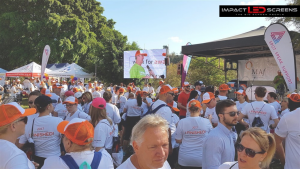 If there is one thing that has come from the dark time of Co-vid 19 and that’s how to get your message out to people who may be unwilling or unable to attend your live event? Why not stream the event to your socials so that no matter where in the world your audience is, they too can be a part of your next showstopper? This is extremely cost effective and can be as simple or as elaborate as you like. Our company has done events that have been streamed to socials with as few as 1 x Camera Operator and 1 x Social Co-ordinator or as many as 10 x Camera Operators’ a Technical Director and a Producer. It is entirely up to the organiser and their budget, but as I said at the outset it doesn’t have to break the bank. Live streaming to your Event LED screens likewise is a must and works beautifully at bringing all the elements of the Event together. Large Event LED Screens don’t always have to be set up traditionally either side of stage, why not put some LED Screens strategically around your venue displaying your Social Media Live Stream? Very powerful technology that wow’s.

Another powerful often overlooked element of a successful Event is having a clear plan for content that is going to be displayed on the Events LED Screens prior to the official beginning. How often have you been to a concert or a festival and seen a static slide just sit there for hours? The audience is present and often restless, due to most gig’s never running on-time. Why not engage with your audience with your message or offer? You could use the LED screens placed at strategic locations to run pre-shows or montages to keep the audience engrossed and engaged. This will help break any anxiety that the crowd may be feeling if the event does not run to time. Moreover, such pre-shows can be used as an effective prelude to the main performance. Smaller  LED message boards can display high definition images around the venue which influence the viewing experience for the audience.

LED Screen hire in Brisbane and on the Gold Coast, can advise on the process of how to create and make an event social media friendly.  You could have a picture wall for example where the audience can send pictures of themselves having a fantastic time. These new event interactions boost the engagement of the audience. You could request the audience to keep updating their social media status with specific hashtags for the event. LED screens are a unique medium for the audience to access social media, and share, like, and subscribe to the event pages and updates. With giant LED screens displaying their posts, an update will surely leave the sender feeling part of the event as opposed to a mere spectator. Any inappropriate content can be mediated before going live on the screen to ensure content is appropriate.

Everybody enjoys a few seconds in the spotlight and a bit of stardom. Organizers could place LED screens at specific locations and use them to evoke crowd participation before the beginning of the actual event. You could announce different fun activities for the audience and record them in the act. What about highlighting the best dressed couples for example, creative games such as Propose Live and Win a Prize or Kiss Ca, would certainly add extra excitement to your next event, and would automatically garner crowd participation.

The use of LED screens at events has long been popular but creating an experience with them in a way that will have them raving, well that is new.

If you want more information about Event LED Screen Hire in Brisbane or on the Gold Coast, then you must visit Impact LED Screens today.

Google Review from Our Client