Home > Different Types of LED Displays and Their Uses

Different Types of LED Displays and Their Uses

Light Emitting Diodes or more commonly called LED’s have been used in modern LED displays for many years. These LED Displays have been incredibly popular in many industries all over the world. An incredible invention that uses very little energy to create very high brightness light outputs. When many thousands of these small LED’s are combined into an image, they have a dramatic impact. This visually appealing medium has found its way inevitably into the world of advertising. Initially, the advertisements were very basic words on solid (usually black backgrounds) due to the very low pixel density available at the time. There began the worldwide trend of converting the tradition two-dimensional advertisements and posters that you see everywhere, into stunning static or video content. This wonderful invention has been used to great effect by the advertising industry to market its products effectively to large groups of people in what often is a short viewing time. It is no surprise that LED Screen Marketing is now the corner stone of any successful marketing campaign. 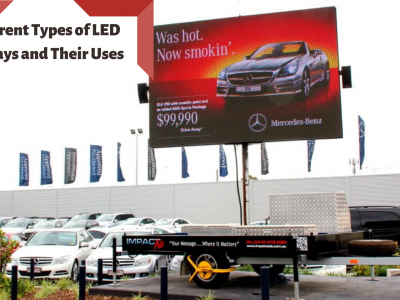 As wonderful as the LED technology has been to the advertising industry, there are some considerations that need to be made when it comes to preparing the content. Depending upon the industry, the audience, and the clients, some customizations need to be made. There is always something more that is often forced into advertisements, which often has the effect of confusing the core intended message. With LED Screen advertising, the key tenant is less is more to keep the message clear and to avoid confused messaging. Let us have a look at two different situations and the different styles of  LED advertising signs that might be used..

Different styles of LED Screens are used for indoor locations vs outdoor settings. The indoor screens would typically require less brightness as they are usually not competing with the Sun. The indoor setting typically has a much closer viewing distance, requiring a tighter pixel pitch (P followed by a number which indicates the mm separation of the individual pixels) would be required to avoid the individual pixels being seen and an appearance called pixilation when viewed from too short a distance.

Some LED display panels use only one colour. Some may use two colours, while some use three – five colours, depending on the individual requirement of the site. The new modern technology LED Screens can replicate millions of colour combinations through the combination of red, green and blue LEDs, this is more commonly referred to as RGB  .

Each of these different styles of display panels have their place, the more basic single or multi colour panels would likely be perfect to display basic messaging like you might see in a convenience store for example but it probably isn’t going to motivate you to take a wonderful overseas trip to an exotic location. A full colour screen displaying an immersive image, however, can captivate and engage people and motivate them to act.

Google Review from Our Client